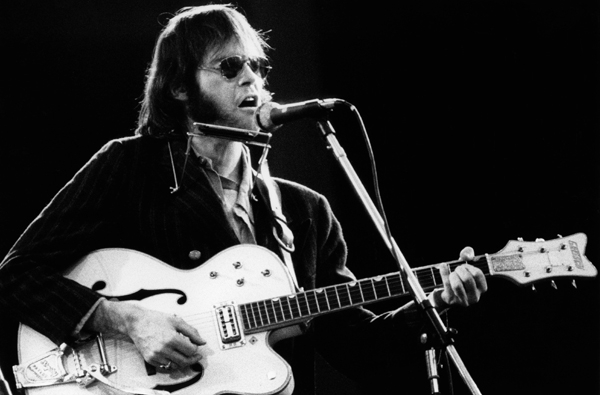 We're now just a week away from the release of CSNY 1974. Over the past few weeks, Rolling Stone has debuted David Crosby's "Almost Cut My Hair," Stephen Stills' "Change Partners" and Graham Nash's "Pre-Road Downs." It's now time for our final premiere, and you probably figured out by the pattern who's next. Here's Neil Young's "Only Love Can Break Your Heart" live in 1974.

The song originally appeared on After The Gold Rush, but was first played live at a Crosby, Stills, Nash and Young concert in May of 1970. It was a perfect track for the quartet's lush harmonies and became a regular highlight of the 1974 reunion tour as well as the group's 2006 Freedom of Speech outing.

Crosby, Stills, Nash and Young last performed at the 2013 Bridge School Benefit, but they haven't toured in eight years. Graham Nash holds out hope they'll hit the road at least one more time. "I just want to let people know what great music we could make because drugs are out of the way now," he told Rolling Stone last year. "Stephen and David are totally straight now, and so alive! It would be fantastic. That's what would happen in my perfect world."

The tour came at a time when Young was writing songs at a furious pace, and he often tried out new material on stage, playing some songs only a handful of times. CSNY 1974 preserves such rarities as "Love Art Blues," "Pushed It Over The End" and "Don't Be Denied." The rarest track is "Goodbye Dick," a song they played August 14th, 1974 at the Nassau Coliseum, just five days after President Richard Nixon resigned in disgrace.

Fans can finally check out CSNY 1974 when it hit shelves on July 8th. The album will be available in a variety of formats, including a 3 CD/DVD set, a Pure Audio Blu-Ray (192kHz/24-bit) and a 16-track single CD. Many of the sets will have a 188-page booklet, and there will also be a limited edition set of 1,000 copies featuring a coffee table-sized book and six 180-gram 12” vinyl records. A pre-order of CSNY 1974 is available on the band's website.