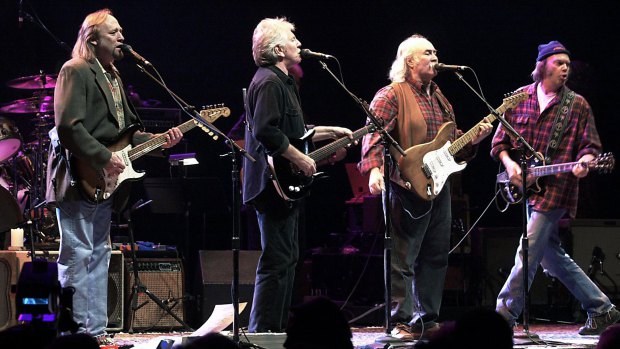 "I never heard anybody be that intense on a record. Ever.

Last week, Crosby, Stills, Nash and Young officially announced the long-awaited CSNY 1974 collection, documenting (as the title suggests) the band's 1974 tour. The concert recording will be offered in a number of formats, including a three-CD/DVD box set, a Pure Audio Blu-ray (192kHz/24-bit) collection and a 16-track single CD. The bonus DVD features eight songs filmed at the Capital Center in Landover, Maryland and Wembley Stadium.

David Crosby told Radio.com about the package a few weeks ago, saying that they created it from recordings of eight different shows during that tour. He also cited one of his highlights of the box set: a rarely performed, never commercially released gem from Neil Young.

The song is called "Pushed It Over the End," and Crosby described it as "one of of the most intense pieces of music I've ever heard it in my life. It might be the single greatest Neil Young live [performance] ever. I never heard anybody be that intense on a record. Ever. Anybody. Anybody. Ever." That song isn't the only performance on the new box set that knocks him out. "Repeatedly all through this thing there are just moments where you say, 'Wow, did they do that?' It's stunning stuff."

In a separate Radio.com interview with all three Crosby, Stills and Nash bandmembers, Graham Nash said that they were lucky to even have video footage to include on a DVD. "In 1974, no one was using big screens on the side of the stage," Nash explained. "They had one at the Capital Center, and it was for a basketball game three nights before. And we said, 'Well, why don't you just leave the cameras up and shoot our show?' And it's a little funky, because we didn't light it for television. But it's very, very interesting."

Crosby said that one of the reasons why the box set has taken so long to complete and release was Young's insistence on making the recordings available in the Pure Audio Blu-ray format. "He said, 'I want it to happen, but it's got to be at 24-bit, 192 [kHz].' I'd love to argue with him, but he's not wrong. MP3s are crap, they deliver 15% [of the music], the rest of it is just an encryption filling in the holes. It's not any good. You don't hear the music we make. That was his beef with Steve Jobs, he just wanted to go into Apple and rip him a new orifice."

CSNY 1974 hits stores and digital outlets July 8. Below is the complete track listing for the various versions of the release.