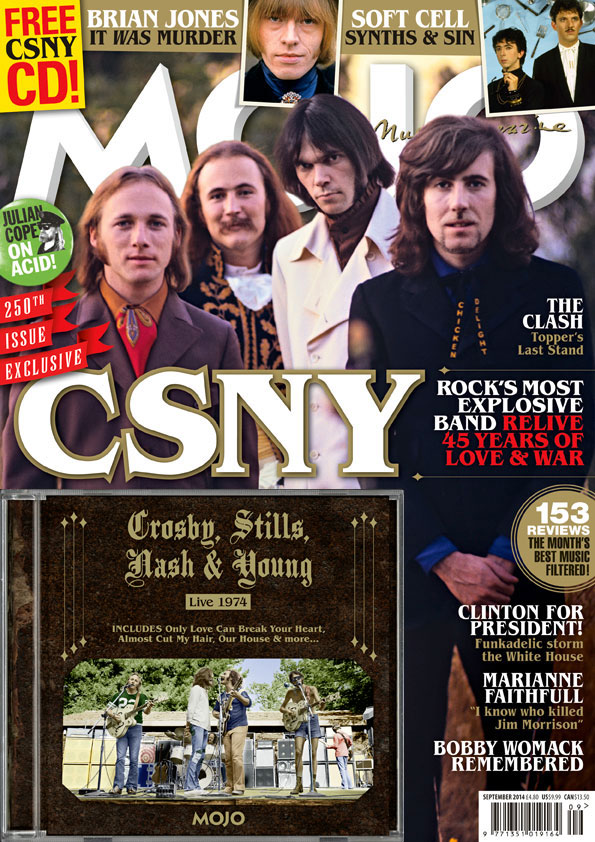 "A LOT OF PEOPLE SAY, Was it great that Neil Young joined CSN or did that kill CSN?" It's a question posed not by MOJO but CSNY stalwart Graham Nash in an exclusive cover feature in the 250th issue of MOJO magazine, on sale in the UK on Tuesday, July 29.

As amazing Crosby, Stills, Nash & Young music – recorded on their notorious 1974 reunion tour but previously unreleased – emerges from the archives, the group reform in the pages of MOJO to ponder the forces that draw them together and tear them apart, time after time.

In 1969, they were already a successful but volatile trio as Crosby, Stills & Nash – brandishing the hippest hit album of the moment – when Neil Young was recruited to add guitar and songs. But as MOJO's new interviews reveal, Young was far from first choice, as Stephen Stills went shopping for Eric Clapton, Steve Winwood, even George Harrison.

As David Crosby wryly notes: "We could have gotten anybody and we wouldn't have had to give them a fourth of it." Graham Nash puts it even more vividly: "It was like lobbing a hand grenade in a vacuum."

As a quartet, they wowed Woodstock, made the astonishing Déjà Vu album, played magical shows, had blazing rows. But things fell apart; the centre could not hold that much ego, rivalry and drug-consumption.

"Excessive excess, guilty as charged. It was mental."

"If you give a bunch of very young guys millions of dollars and get them high as kites and let them loose it's just sort of inevitable," a candid Crosby tells MOJO's Sylvie Simmons.

Having split once, perhaps twice, the four reconvened for what was then the biggest and most lucrative rock tour yet devised, all across America and ending at Wembley Stadium, London on September 14, 1974. Some of the music was divine, some of the shenanigans mind-boggling…

"Excessive excess, guilty as charged," Stills admits today. "It was mental. The stadiums and the feeding frenzy – managers and everybody going, ‘There's a lot of money here; what can I get?'"

Sometimes the cocaine made a mess of the music, but most of the time it didn't – as diehard fans and CSNY-curious alike can discover via MOJO's exclusive covermount CD, which features audio tracks and a video performance filtered from the new CSNY 1974 box set. Almost Cut My Hair, Change Partners, Pre-Road Downs, Only Love Can Break Your Heart, Carry Me and Our House.

Here's a taste, for your delectation…

It brings the CSNY story back to its fundamental essence: the alchemical blend of voices and personalities that animates their work. “What draws this band and what pushes it apart has the same answer," says Nash: "the music."

Read more, much more, in the latest MOJO Magazine, on sale in the UK on Tuesday, July 29.