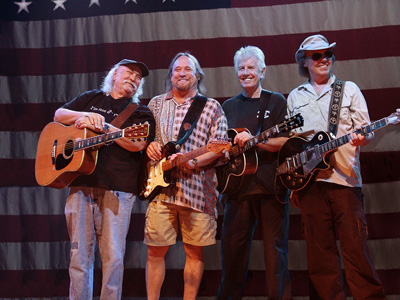 Legendary rock and roll supergroup Crosby, Stills, Nash & Young (CSNY) have just announced “Freedom Of Speech ‘06,” the quartet’s first road adventure together since 2002. A tour of North America, the more than two month-long itinerary kicks off July 6 in the City of Brotherly Love—a fitting starting point for these four longtime friends and collaborators—with a concert at Philadelphia, PA’s Tweeter Center. Other highlights include Denver, CO’s Red Rocks on July 17, California dates at Concord’s Chronicle Pavilion on July 25 and the Hollywood Bowl on July 31, and on the east coast, an August 22 show at Jones Beach. Canadian dates include a July 10 engagement at Toronto’s Air Canada Centre.

Produced by The Next Adventure, A Live Nation Company, the North American itinerary runs through mid-September and encompasses dates in over thirty cities. Billed as “An Evening With Crosby, Stills, Nash & Young,” Freedom Of Speech ‘06 will tour with no opening act, and the shows will spotlight an extended set from CSNY, as in their past outings. Repertoire will include their classic work together, as well as favorites from their storied individual careers. With these iconic singer-songwriters’ reputations for outspoken dialogue, social activism, lyrical expression, musical virtuosity and artistic integrity, Freedom Of Speech ‘06 is certain to ring loud and clear and passionately. In what couldn’t be a more timely or fitting presentation, music from Neil Young’s just-announced forthcoming album Living With War will make its concert debut during the reunited group’s Freedom Of Speech ’06 tour. All four members of CSNY, who have a long history of politically charged music including the Kent State-themed anthem “Ohio,” believe that in light of the current environment, it’s time for them to be out on the road fighting for America, and for peoples’ rights to stand and be counted. During an interview with CNN last week, Young said, “There’s a conscience in the country, and I don’t think it’s being spoken. Everyone deserves a chance to be heard…we don’t have to believe what our president believes to be patriotic.” A stone cold politically skewed classic, Living With War questions, comments and gives voice to thoughts and feelings about the war and the administration that will open up dialogue among countless Americans with songs including “Shock And Awe,” “Flags Of Freedom,” “Looking For A Leader” and the title track.

Freedom Of Speech ’06 runs through mid-September, visiting more than thirty major cities nationwide; additional dates are still being confirmed. Shows will go on sale beginning this coming weekend in Detroit, Washington, Seattle, Portland, Concord, Holmdel, Wantagh, and Winnipeg with additional cities on-sale announcements following in the next few weeks. Tickets will range from $35.00 through $125.00, with a limited number of gold circle tickets available. Members of the CSNY fan club will have a special pre-sale period prior to the public on-sale dates. Freedom Of Speech ’06 is CSNY’s third tour of the new millennium, following up their historic 2000 reunion tour—their first since 1974—and 2002’s Tour of America. CSNY’s almost four decades long musical connection is one of the most influential and enduring collaborations in contemporary music. When they first came together as a quartet in 1969, each member brought to the partnership a pedigree from another formidable band-- Crosby from The Byrds, Nash from The Hollies, and Stills and Young from The Buffalo Springfield--and their synergy as a group brought them to new heights.

CSNY’s historic 1969 performance at the original Woodstock festival caused them to be called the “voice of a generation,” and the foursome’s 1970 debut LP Déjà Vu hit #1 and delivered timeless classics including Crosby’s “Almost Cut My Hair,” Stills’ “Carry On,” Nash’s “Teach Your Children,” and Young’s “Helpless.” CSNY’s recorded output also includes 4-Way Street (1971), American Dream (1988) and Looking Forward (1999). Freedom Of Speech ‘06, launching July 6, is a rare opportunity to see four of rock music’s most important figures on the same stage, raising their voices together in song—exercising their own free speech and inviting yours as they unite to be heard in the largest possible forum. Live Nation is a leading live content and distribution company focused on creating superior experiences for artists, performers, corporations and fans.

Live Nation owns, operates or has booking rights for 150 venues worldwide and promoted or produced over 28,500 events in 2005. Live Nation is headquartered in Los Angeles, California. Live Nation is listed on The New York Stock Exchange, trading under the symbol “LYV”.

For more information regarding Live Nation and its businesses, please visit the company’s web site at www.livenation.com.