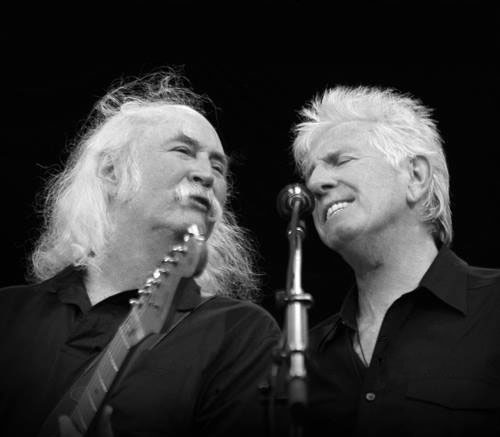 Los Angeles, August 8, 2007 -- GRAMMY-winning, Rock and Roll Hall of Famers David Crosby and Graham Nash will embark on a tour as "two together," kicking off with a concert at the Thomas Wolfe Auditorium in Asheville, NC on Sept. 30. Billed as An Evening With David Crosby And Graham Nash, the series of dates offers a rare opportunity to savor an intimate, harmony-heavy experience with two of rock's most legendary singer-songwriters. The last time David and Graham toured in tandem outside of the larger Crosby, Stills & Nash and Crosby, Stills, Nash & Young configurations was early 2005 in Europe (their most recent outing in any grouping was 2006's nationwide CSN&Y "Freedom Of Speech" tour).

David Crosby and Graham Nash will perform a diverse range of memorable songs from throughout their careers, and spotlight selections from albums they've recorded together. Their most recent joint release was 2006's Highlights, an essential single-disc distillation of their sprawling, highly acclaimed 2-CD set, '04's Crosby-Nash. Stand-out tracks include "Lay Me Down," "Milky Way Tonight," "Grace/Jesus Of Rio" (with guest vocals from James Taylor), "Through Here Quite Often" and "My Country Tis Of Thee," an elegant acoustic rendition of the anthem that originally debuted on the award-winning TV series The West Wing.Produced by Nash and Crosby with the father/son team of Russell Kunkel and Nathaniel Kunkel, these recent titles represent Graham and David's first recordings as a duo since 1976's Whistling Down The Wire. Their first LP together, '72's Crosby & Nash, featuring the hits "Southbound Train" and "Immigration Man," is regarded as one of the best side projects to emerge from the CSNY sphere. The duo also released 1975's Wind On The Water and the live gem Another Stoney Evening. Most recently, in addition to Highlights, Graham and David's famous harmonies graced David Gilmour's '06 hit "On An Island," and they performed with the guitar virtuoso at his 3-night stand at London's Albert Hall.

David Crosby and Graham Nash first harmonized in 1968, and have never stopped touring and recording together - or pursuing endeavors outside of CSN/CSN&Y. Crosby first rose to superstardom as a founding member of seminal folk-rock band The Byrds. Later, in addition to acclaimed solo work, David Crosby toured and recorded with CPR, the jazz-flavored trio he formed with his son, James Raymond. His classic songs include "Eight Miles High," "Almost Cut My Hair," "Déjà Vu," "Guinnevere," "Long Time Gone" and "Wooden Ships." In '06, Rhino released David Crosby's Voyage, a 3-disc retrospective box set, and a CD/DVD reissue of his classic solo debut LP, If Only I Could Remember My Name. He is also the author of three books: Stand and Be Counted: Making Music, Making History/The Dramatic Story of the Artists and Causes That Changed America and the autobiographies Long Time Gone and 2006's Since Then: How I Survived Everything And Lived To Tell About It. The latter chronicles, per Entertainment Weekly, "A fascinating life worthy of a sequel."

Graham first rose to fame with British Invasion stars The Hollies, whose Nash-penned classics include "On A Carousel," "Bus Stop" and "Pay You Back With Interest;" his CSN/CSN&Y hits include "Teach Your Children," "Our House" and "Marrakesh Express." Among his four solo titles are the acclaimed '71 debut LP Songs For Beginners and '02's Songs For Survivors, the first album by a major artist to come out in 5.1 before its stereo release. Nash is also a renowned photographer whose images were the subject of 2006's Eye to Eye: Photographs by Graham Nash at San Diego's Museum of Photographic Arts, a show based on Nash's 2004 book by that name (to be out in paperback in the near future). Graham is co-founder, with R. Mac Holbert, of Nash Editions, whose pioneering work in digital fine art printing is in the Smithsonian's permanent collection. Nash Editions: Photography And The Art Of Digital Printing, was published in 2006 and in 2007, Nash and Holbert were honored with the Lifetime Achievement Award by the global Digital Image Marketing Association.

An Evening With David Crosby And Graham Nash celebrates the enduring musical brotherhood that brings out the best in these distinct yet sublimely complementary collaborators who are among the most legendary duos in contemporary music.